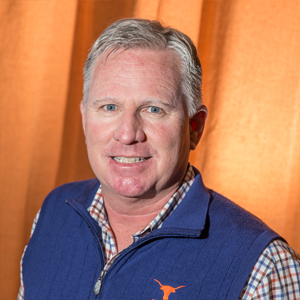 Steve Termeer, General Manager/COO at the University of Texas Golf Club, started his golf career long before ever stepping foot on the UT campus. Named #1 high school player in America in 1986, Termeer won several events including the PGA Junior Championship, American Junior Championship and Doral International Junior. Termeer played golf for The University of Texas while earning a BBA in Finance graduating in 1991. From there, he achieved his class “A” status with the PGA and became the Head Golf Pro/Club Manager at Barton Creek. In 1996, he was named GM/COO at Austin Country Club, at the age of 28. Termeer won the STPGA’s distinguished Bill Strausbaugh award in 2007. Termeer has served the Southern Texas PGA by participating on the Awards, Finance and Tournament Committees and chaired the Scholarship Committee in for 10 years. Termeer is also on the Longhorn Hall of Honor Council and sits on the panel for rating courses by the Dallas Morning News. He serves as an Advisory Member of the Legends Junior Tour. He continually serves as president of the Hannon Cup Association for the past 5 years. Personally, he is married to an outstanding golfer, Tara, who is the buyer for the club, which has been recognized in Golf World as a top 100 Golf Shop in 2005, 2006 and 2010. He is also a father of two, Tayler, currently a member of the UT golf team, and Sydney. Steve and Tayler are the first father/son duo to play at UT, both won Texas state high school championships 25 years apart, and have 8 state UIL medals combined.

Copyright ©2020 by University of Texas Golf Club. All Rights Reserved.  Private Golf Club sites by MembersFirst  |  Terms of Use  |  Privacy